The firm would like to welcome James J. Horning, Esq. James Horning is a native Delawarean and graduated from the University of Delaware in 2000 with a Bachelor of Science and Advanced Honors. He received his Juris Doctor degree from Temple University, Beasley School of Law in 2007. Mr. Horning is admitted to practice in Delaware, New Jersey, Pennsylvania and the United States District Courts for the Districts of Delaware, New Jersey, and Eastern Pennsylvania. Mr. Horning has litigated cases involving personal injury, premises liability, product liability, toxic tort, and real estate. In addition to litigation practice, Mr. Horning has done SIU work for matters involving potential insurance fraud.

The firm would like to welcome Daniella C. Spitelli, Esq., as its new associate. Ms. Spitelli was born and raised in Wilmington, Delaware and graduated from the University of Delaware in 2011 with a B.A. in Criminal Justice.  Ms. Spitelli then worked as a juvenile and adult probation officer in Delaware prior to entering law school.  In 2018, Ms. Spitelli graduated cum laude from Widener University Delaware Law School with a Juris Doctor degree and was admitted to the Delaware Bar.  Ms. Spitelli graduated with Pro Bono Distinction and was awarded the American Association for Justice Trial’s “Best Opening Statement.”  Prior to joining the firm, Ms. Spitelli served as a judicial law clerk for the Honorable Carl C. Danberg and the Honorable Robert H. Surles of the Delaware Court of Common Pleas and subsequently was employed as an associate in professional liability defense.

2020 Recipient of the Beth H. Christman Award for Excellence in Academics and Trial Advocacy

The firm would like to congratulate the 2020 Recipient of the Beth H. Christman Award for Excellence in Academics and Trial Advocacy, Ms. Rachel Tarver of Delaware Law School, Widener University.

Matthew E. O’Byrne, Esq. achieved a defense verdict after a three-day jury trial in a case involving a slip and fall on an algae covered deck.  The jury determined Matt’s client was not negligent, where the plaintiff had $450,000 in specials and a low back injury.

The firm is pleased to announce the election of Matthew E. O’Byrne, Esq. and Kenneth M. Doss, Esq. as Associate Members of the American Board of Trial Advocates.

The firm names Anna Fiscella as a new law clerk

The firm would like to welcome its new law clerk, Anna Fiscella.  Anna received her Juris Doctor, Cum Laude, from Delaware Law School, Widener University in 2018, where she served as a Vice President of the Moot Court Honor Society and Articles Editor for the Delaware Journal of Corporate Law.  Ms. Fiscella received the Donald E. Pease Award for Best Student Publication in 2017, and her Note is published in the Delaware Journal of Corporate Law, Vol. 42, Issue 3. She served as an extern for The Honorable Kent A. Jordan of the U.S. Court of Appeals for the Third Circuit, and intern to The Honorable James T. Vaughn, Jr. of the Delaware Supreme Court. She also served as a judicial clerk to The Honorable Charles E. Butler of the Delaware Superior Court.

In ACW Corporation, Colin M. Shalk, Esq. successfully pursued a motion to dismiss a subrogation suit against Defendants for reimbursement of worker’s compensation benefits. The Delaware Superior Court granted defendant’s motion to dismiss, finding the damages related to commutation were speculative and the disputed amount was already paid to the PIP carrier.

Donald M. Ransom, Esq. presented a motion for summary judgment which was granted. The Delaware Superior Court held that once an individual has been excluded from an insurance policy, he or she is not entitled to any coverage under that policy. Villalobos-Martin, C.A. No. N18C-01-145 JAP, Rennie, J. 2019 WL 2121103 (Del. Super. May 14, 2019).

Matthew E. O’Byrne, Esq. obtained a favorable jury verdict, below the offer of judgment. in a matter involving permanent injury.

In a recent case, Mr. Kenneth M. Doss, Esq. presented a motion for summary judgment which was granted by the Delaware Superior Court, dismissing the claims against his client.

The firm is pleased to announce Deborah L. Cuoco, Esq.’s return to the firm. Deborah is licensed to practice law in Delaware, Virginia and the District of Columbia.  Deborah’s experience in both state and federal courts primarily involves personal injury, warranty liability, product liability and insurance coverage disputes.  She is a graduate of the Syracuse University College of Law where she served as a member of the Moot Court Executive Board. She is a member of the Order of Barristers and recipient of the Robert W. Miller Award for her contributions to Moot Court.

In an important decision, the Delaware Superior Court granted defendant’s motion for summary judgment, holding defendant was not negligent in failing to inspect an electrical system in his auto repair shop and was not liable for a bailment agreement to which he was not a party. Colin M. Shalk, Esq. represented the defendant.

2019 Inaugural Winner of the Beth H. Christman Award for Excellence

The firm would like to congratulate its 2019 Inaugural Winner of the Beth H. Christman Award for Excellence in Academic and Trial Advocacy Studies, Ms. Kaitlyn Mazur, from Delaware Law School, Widener University. 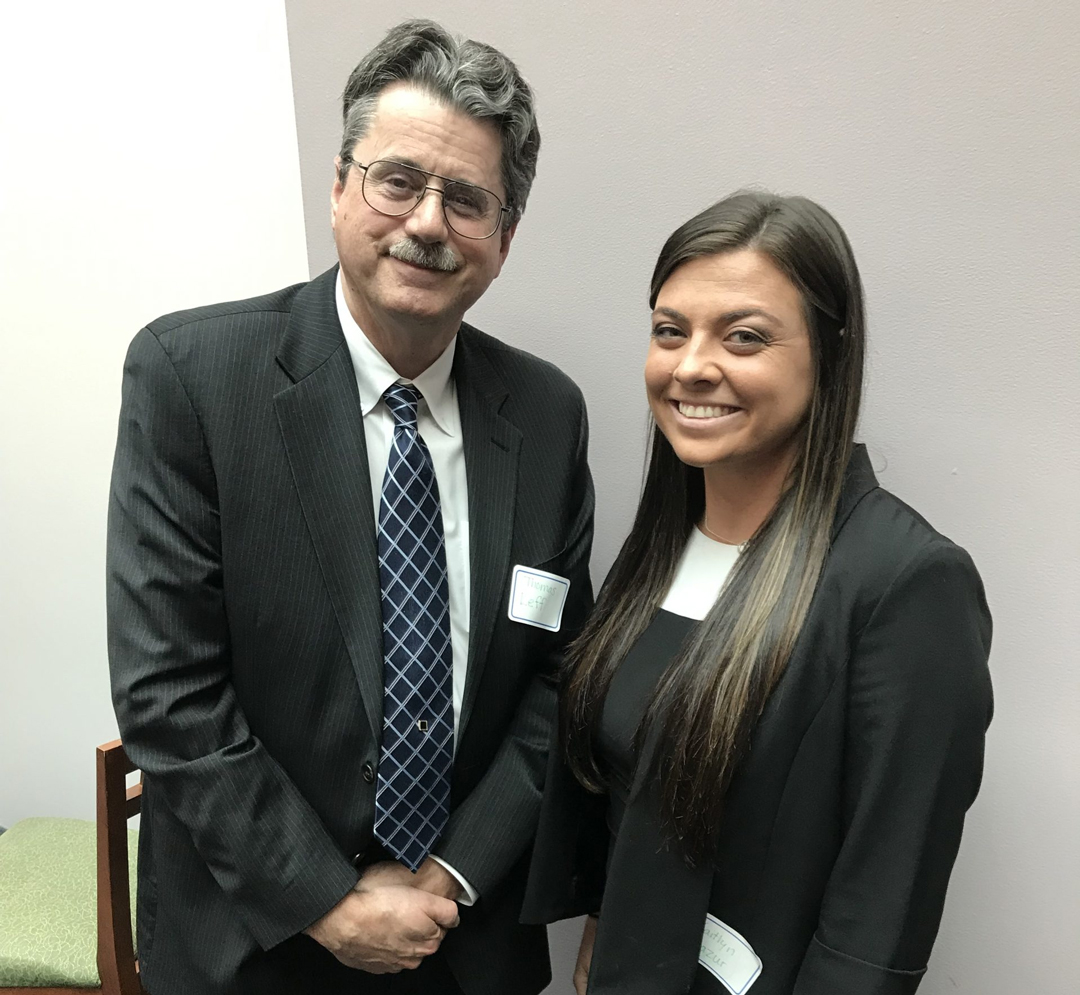 Matthew E. O’Byrne, Esq. successfully defended a disputed motor vehicle accident case. He successfully argued that the alleged injured party was negligent and that her own negligence was the cause of the accident, as well as her own injuries.

Donald M. Ransom, Esq. tried an intersectional accident involving a vehicle rollover. The driver of that vehicle claimed numerous significant injuries including a broken bone in his neck, other neck and back injuries, a detached retina, an inoperable torn rotator cuff and a knee replacement.  The retinal injury was excluded on a pretrial Daubert motion. After a three-day trial involving several experts, the jury returned a verdict of $5,000.  A motion for additur (asking the Court to increase the verdict) was denied.

Donald M. Ransom, Esq. prevailed on a motion for summary judgment for the defendant.  The Court agreed that where the plaintiff is not economically dependent on an insured, he is not considered a member of household, and is therefore not entitled to PIP on an insured vehicle while occupying rental vehicle.  Lockhart, C.A. No. CPU4-17-001788, Rennie, J., 2018 WL 1399612 (Del. CCP March 19, 2018).

In Guzman, C.A. No. N17C-10-313 (Dec. 8, 2017), a personal injury action, the Court granted defendant’s motion for summary judgment based on the statute of limitations.  The defendant was represented by Donald M. Ransom, Esq.

The Delaware Superior Court granted summary judgment to the Uninsured Motorist carrier in a pedestrian dart out case where the driver left the scene. Donald M. Ransom, Esq. represented the insurer. Stape, C.A. No. N16C-10-221 (Dec. 18, 2017)

Beth H. Christman, Esq. argues that plaintiff was not entitled to UIM benefits

Beth H. Christman, Esq. argued to the Delaware Superior Court that plaintiff, an injured pedestrian, was not entitled to UIM benefits under Defendant’s policy.  The Court granted her motion for summary judgment, noting that Delaware law holds UIM as “personal to the insured,” and cannot cover a pedestrian who was not an occupant of the vehicle and where he received full policy limits under Defendant’s liability coverage.

Matthew E. O’Byrne, Esq. achieved a favorable verdict on a matter involving an alleged assault, where the alleged victim sought compensation that included punitive damages as well as injuries, including an orbital fracture, surgery, and permanent vision loss

The Delaware Supreme Court affirmed the decision of the Delaware Superior Court granting summary judgment to an uninsured motorist carrier. Matthew E. O’Byrne, Esq. argued that based on the plain language of Delaware’s former uninsured motorist statute, the insurance policies of all tortfeasors must be aggregated and compared with the plaintiff’s UIM (or in the event of the plaintiff being insured under multiple UIM policies, a single policy of the plaintiff’s choosing). Moffitt-Ali, 2016 WL 6609561, aff’d, 151 A.3d 448 (Table) (Del. 2016).

In an important decision, the Delaware Supreme Court affirmed the application of Stayton v. Delaware Health Corp. to Medicaid payments made for post-PIP medical expenses claimed by a plaintiff in a personal injury suit. Thomas Leff made the winning argument to the Court. Smith, 150 A.3d (Del. 2016).

The Delaware Supreme Court affirmed the decision of the Delaware Superior Court, which granted the defendant’s summary judgment as to plaintiff’s breach of contract and property damage claims. Colin M. Shalk, Esq. successfully demonstrated that Delaware’s Statute of Repose, which sets a specific time frame to file suit regardless of when a plaintiff becomes aware of its injury, applied to the plaintiff’s claim. 326 Associates, L.P., (Del. 2016).

Kenneth M. Doss, Esq. successfully defended a personal injury protection case in which the jury found that a $72,000 surgery was not related to the motor vehicle accident. (May 2016).

Colin M. Shalk, Esq. effectively argued before the Delaware Supreme Court, to dismiss a class action finding that the PIP statute does not absolutely require that all bills be paid or denied within 30 days and that the statute contains its own penalty where PIP benefits are paid untimely. Clark, 131 A.3d 806 (Del. 2016).

Colin M. Shalk, Esq. obtained a defense verdict for his client, a general contractor, after an eight day jury trial. The Plaintiff was claiming over a million dollars in medical expenses and lost wages after a piece of plywood fell on him. The jury found that Mr. Shalk’s client was not responsible for the incident or plaintiff’s injuries. Smith, (January 2016).

Colin M. Shalk, Esq. obtained a favorable decision from the Delaware Supreme Court in a case involving UM/UIM reformation claims and PIP claims. The Supreme Court held that an insurer is not required to offer $300,000 uninsured/underinsured coverage to match an insured’s liability limits, as the statute only requires the insurer to offer $100,000/$300,000. The Supreme Court further held that all PIP bills must be submitted within two years, and that the 90 day extension for submitting medical bills is only applicable if the plaintiff can establish impracticality. Tracey, 2014 WL 3882809, aff’d, 129 A.3d 881 (Del. 2015).

The Delaware Supreme Court affirmed the decision of the Superior Court, which Donald M. Ransom, Esq. successfully argued. Mr. Ransom argued that an occupant of a Delaware registered and insured motor vehicle was not entitled to excess personal injury protection coverage from her own motor vehicle insurance policy as she was an occupant of another Delaware registered and insured vehicle, pursuant to the statute and insurance policy at issue. Barone, 2014 WL 686953 (Del. Super. Jan. 29, 2014), aff’d, 103 A.3d 514 (Del. 2014).

The firm obtains a favorable decision

The firm obtained a favorable decision from the Delaware Supreme Court that Plaintiffs were not entitled to under-insured motorist benefits under their step-mother’s insurance policy for wrongful death of their mother. Plaintiffs’ mother was not a named insured under the policy nor was she a resident of the insured’s household. Further, it was never contemplated by any party that the mother would be covered by the policy. Shuba, 77 A.3d 945 (Del. 2013).

Colin M. Shalk, Esq. successfully argued before the Delaware Supreme Court that the settlement of an uninsured motorist claim was in good faith and therefore a breach of contract claim could not be maintained. Price, 2013 WL 1213292, aff’d, 77 A.3d 272 (Del. 2013).

Supreme Court affirms judgement on behalf of the firm’s client

In an important decision, the Supreme Court affirmed summary judgement on behalf of the firm’s client and found that a landlord was not liable for a customer’s injuries after she tripped on a mannequin placed by the tenant, as the landlord did not exercise sufficient control over the area where the incident occurred.